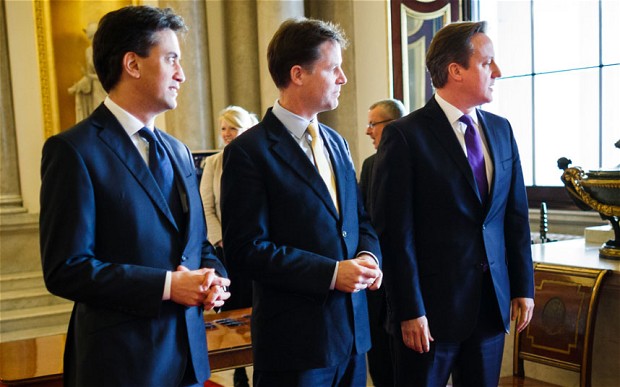 The “choice” before the electorate

Last night Britain’s political system failed the majority of people in our country. After five years of austerity we are forced to accept that by the time of the next election we will have lived through another decade of Tory rule.

This morning I feel genuine despair and am struggling to make sense of the nightmare. My analysis is of course biased. Anyone who has followed these pages will know where my political allegiances lie. I am the son of a life long Trade Unionist, brought up in a staunchly Labour family. At the age of sixteen I declared myself a Marxist and a Socialist and I remain so today. Having acknowledged that, I am more convinced than ever that our democracy is broken.

There will be much soul searching at Labour HQ in the coming months. They should have walked this election, instead they have been wiped out in their heartlands and have failed to inspire an electorate still living in the grip of fierce cuts in public spending. The Tories have increased the national debt, the recovery is stalling, austerity has failed yet Labour has been unable to articulate an alternative.

In Scotland the voters were presented with a clear choice. They have consistently voted to oust the Conservatives and have been let down time and again. The Scottish people are yearning for change, for a government that represents their aspirations for fairness, equality and above all an end to cuts in public services.The SNP offered them everything they wanted.

Parts of their manifesto would have sat comfortably with the likes of Michael Foot or Tony Benn. They promised to end cuts on day one. Labour would only promise to be fairer in choosing where they would cut. The old iron fist in a velvet glove trick. It is no surprise to me that Ed Milliband’s Labour Party received a historic drubbing North of the border. This is clear evidence that when you offer a radical alternative people will rally to it.

It’s true that even if those seats had fallen to Labour last night, it still wouldn’t have been enough to secure a majority under our current electoral system. However, I would argue that had Labour put forward a radical alternative to the Conservatives they would have won far more support in England and Wales than they did. The disillusionment in Scotland is mirrored all over the country. The problem is that in the absence of an alternative to the status-quo many have chosen to abandon the ballot, with around 40% not voting.

Already there is an attempt to steer the narrative away from this basic truth. I actually saw one pundit argue that Labour was too left wing to win. This flies in the face of reality. It is true that Milliband has flirted with ideas of social justice, but he continued to argue that spending should be reduced overall.

We saw queues at polling stations in Liverpool, but here the feeling is one of anti-tory rather than pro-Labour. The local Labour council is unpopular, but in a city-region that has born the brunt of Conservative attacks on the public sector there is no appetite to oust the only viable alternative to the Tories.

In the grip of despair and anger some have opted to blame the electorate for last nights result. The argument goes like this; the country has got what it deserves. People are too stupid greedy or apathetic. Sometimes when the truth seems obvious to you, it is easy to consider everyone else as fools or the duped. I simply can’t lay the blame for this result at the door of ordinary people. It is the job of leaders and political parties is to provide a vision and Labour simply haven’t done this.

It should also be said that this election result is far from an endorsement of  the Conservative Party. They have polled just over a third of the vote and thanks to our archaic voting system they have gained a workable majority. This means the views of almost two thirds of the electorate will not be represented. Britain is deeply divided and we have to consider the real possibility of a break up, especially if the SNP maintains their success in elections to the Scottish Parliament next year.

How will the North of England respond to such a move? There are many in my region who feel great empathy for the Scots. They are desperate for change, but have no hope of a government that represents their aspirations. We’ve been here before and if Labour doesn’t respond people will look elsewhere for more radical alternatives.

Milliband has stepped down now, but how much difference will a change in leadership make. We don’t operate a presidential system in Britain. We vote for parties and policies. Labour needs to consider what it is now. What does it believe in? In my view if it chooses to continue its march to the centre, it will suffer the same fate as the Liberal Democrats. Labour has a duty to be a powerful, credible and a real alternative to the Tories. Why seek power for its own sake? Surely the point is to make a difference.

Sadly, the truth for me is that we live in a broken democracy. We have woken up to a reality where simply voting every five years isn’t good enough. We must all become politicians now. Democracy is for life not just for elections. We must make this the age of community activism.

I have made a pledge to my self to become more active from now on. If Parliament won’t deliver a government that serves the needs of all the people, if Labour can’t articulate a vision that inspires its natural constituency; then we have to create that vision for ourselves. We have to come together to reclaim our communities and take back the power from a political elite that is more remote than ever before.

It’s time we all became activists. Get out and defend your local libraries, parks and schools. Oppose cuts in local services, join a union and hold its leadership to account. Start talking to your friends and neighbours about politics and lobby your MP’s and councillors. They serve at our pleasure. If they won’t do it, then maybe its up to us to fix our broken democracy.