Have Cameron’s ‘Bullingdon boys’ run out of ideas already? 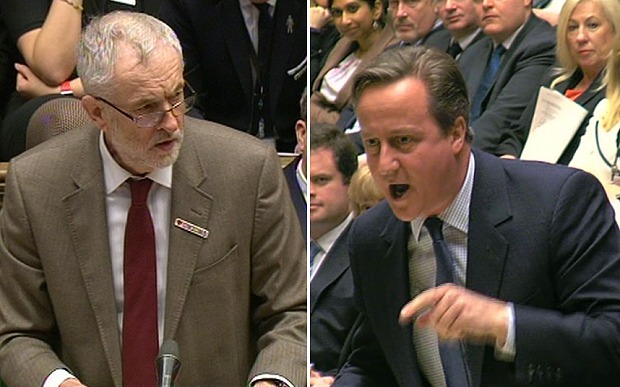 I have long believed that our system of government is in need of major reform. Recent events have convinced me that what we now need is a complete democratic revolution. Parliament is no longer fit for purpose, if indeed it ever was.

The behaviour of David Cameron and his backbenchers prove one thing; the ‘House of Commons’ is not a place where the great issues of state are debated, or where decisions are made in the best interests of the people as a whole. It is little more than a front for a dictatorship of the free market and capital.

These are people with a deep sense of entitlement, who do not feel that questions posed either by the opposition or the public are worthy of serious consideration. How else can we explain the behaviour of the Prime Minister and the sycophants who sat behind him this week?

Instead of putting forward the merits of their case they could only resort to playground tactics aimed at diverting attention away from the issues at hand. To an extent it worked, with some sections of the media choosing to focus on the knockabout nature of the exchanges, rather than the serious questions being raised by Corbyn.

For the first time in decades, we have a leader of the opposition who presents a radical alternative to the government. Whether you share his ideological position or not, it is impossible to argue that Corbyn hasn’t presented a genuine alternative to the Tory Party.

Where previous Labour leaders would have sought to triangulate opinion polls and focus groups, Corbyn and his front bench have challenged the government based on deeply held convictions and principles. Instead of engaging in cheap point scoring, the Labour leader has used conventions like Prime Minister’s Questions to ensure that the voice of the electorate is heard in Parliament. This is a noble and worthy strategy.

The response of the government has been shameful. If you were being charitable you could say their tactics have been simply diversionary, based on being wrong-footed by this new approach. In reality what we have here are cynical attempts to bully and undermine.

Attacking someone’s ideas, or answering serious questions by referring to your opponents attire, or resorting to football chants, such as “who are ya?” says more about the Conservative Party than it does about Jeremy Corbyn. They display a staggering arrogance that is born out of a misguided sense of invincibility and superiority. Worse still they do a disservice to the people they allegedly serve.

Sadly though, the problem goes beyond the antics of these self-styled ‘Bullingdon Boys’. To frame this as a problem of individual Tory MP’s, who simply lack decorum and wit misses the point and lets the system off-the-hook.

Britain has an electoral process that does little more than skew elections in favour of a increasingly narrow political orthodoxy, propped up by a mainstream media who are essentially cut from the same cloth as the people they comment on. Add to this the fact that we have a hereditary monarchy that has a worrying level of access to key decision makers and an unelected second chamber and you begin to see  my point.

No reasonable person could successfully make the case that our democracy truly serves the electorate. Instead it has long been evident, at least to me, that the entire political structure is set up in order to concentrate power, wealth and influence in the hands of a powerful minority. Meanwhile the majority can continue to vote until they’re red in the face, but little if anything will actually change.

In a column, written in the Daily Mirror, The Labour Leader spoke of handing power back to the people. John McDonnell, the Shadow Chancellor, has spoken of democratising the workplace and industry. While I am fully supportive of these proposals, we must go further.

If we are to stand a chance of seeing these ideas implemented, or more importantly sustained, we must turn our attention to the democratic process its self. We need a politically educated and astute electorate able to go toe-to-toe with any government and challenge their MP’s as equals.

In my view, it’s time to see Government and Politics taught on an equal footing with Maths, English and Science. It should be possible for every citizen to aspire to political office and they should be provided with the skills and knowledge to do so. No longer should this be the preserve of a motivated or self-interested few.

An expert electorate is what the powerful few fear most. It terrifies them because it leaves them with nowhere to hide. Cover-ups become more difficult, if not impossible, under the watchful gaze of an educated public. Presenting policies that serve only the few becomes a blind alley, when the voters are able to dissect them to the ‘nth degree and expose their deficiencies.

A democratic revolution is more necessary today than it has ever been. It is a struggle that started with the Labour leadership contest and now it’s being fought on the benches of the ‘Commons’. This is nothing less than a struggle for the right of the many to have a say in the decisions that effect their lives. It is a rejection of the notion that our masters know better.

If we are to be triumphant then all of us need to arm ourselves with a greater sense of objectivity. We don’t need a political class or a commentariat telling us what’s electable. We can and should work that out for ourselves. Of course we don’t always have to agree with dissident view-points, but we should be prepared to debate them on their merits and not succumb to name calling and personal insults.

We need a higher index of suspicion when it comes to those who seek to reject out of hand, demonise or belittle opposing perspectives. Why is it they seek to drown out the opposition? Is it because they are afraid that others may hear what their opponents have to say?

I believe that those who run our system of government are threatened by the suggestion that there is another way. This is evident in the behaviour of the Prime Minister and his MP’s this week. Surely such personal attacks would be unnecessary, if they had a coherent political argument in their arsenal. They clearly don’t.

Whisper it quietly, but a democratic revolution is under way in Britain. The seismic shift began in Scotland, but the election of Jeremy Corby has ensured it’s aftershocks are being felt south of the border too. These are early days, but already the establishment are running out of ideas and resorting to cheap insults.

The louder they scoff the harder we should listen. The more they obfuscate the more relentlessly we should challenge and the more exposed they will become.

The ‘Bullingdon Boys’ are running out of ideas. Wasn’t it their own ideological hero, Margaret Thatcher, who said when your opponents resort to personal attacks, they haven’t a single political argument left?