There’s a story that Charlie Chaplin was once confronted by a question from a journalist about his religion. At the time it was said by many that Chaplin was “secretly Jewish.” Here, the use of the adverb “secretly” passes judgement on the adjective Jewish. Why would the movie star want to hide his faith, if indeed he was Jewish? The implication was that he was ashamed, maybe he thought Judaism was actually something to be feared and hidden away.”Many people believe you are Jewish, are you?” asked the reporter. The icon’s response was as sharp as his genius, “I do not have that good fortune,” he said.

To have answered in the negative, no matter how politely, might have confirmed that there was indeed something malign about Judaism, that needed to be hidden. Perhaps that was the questioner’s intent. However, in one sentence Chaplin had completely disarmed his inquisitor. The power of language to distort our perception of the world is remarkable. Thankfully Chaplin’s own command of words, and quick wit, was able to counter any negative connotation.

I’ve thought about this story a lot lately; about how the subtle use of language can prime people to respond in a certain way to ideas and groups, be they ethnic, religious or political. Of course we’ve seen this many times recently in the context of the ongoing leadership challenge in the British Labour Party.

Consider the recent elections to the party’s ruling body. A number of pro-Corbyn candidates have now won seats on the National Executive Committee, as a result of a democratic process, and at the expense of the right-wing incumbents. Interestingly, in reporting the result, journalist Michael Crick chose to suggest that one of the defeated candidates, Johanna Baxter, had been removed after she had spoken out about bullying in the party. In doing so he used the word ‘ousted’.

Of course in reality this individual’s seat was simply up for reelection, in accordance with party rules. Unsurprisingly, given the demographic and political shift inside UK Labour, candidates supportive of the leader are more likely to triumph in a vote, and consequently they did. The NEC election was a thoroughly peaceful process, conducted by mail and online; no insurrections or uprisings. Why then is it necessary to describe this as one candidate ‘ousting’ the other.

Could the answer lie in the fact that those six letters, that make up the word ‘ousted,’ convey the impression of struggle, maybe even a violent one? Perhaps it was revenge for speaking up against alleged harassment? Crick’s tweet, above, could certainly be construed in that way. I believe this is not an accident, and is instead part of a consistent and, in some cases, orchestrated attempt to associate radical left-wing views with violence and intimidation, and thereby discredit them.

When such phrases are uttered we are justifiably incredulous, and absolutely correct to reject and challenge the narrative being created. However, how should we respond when the attacks are more subtle and insidious, as seemed to be the case with the one faced by Chaplin?

There is a correlate here. I am talking now about the use of the phrase ‘Trot’ or ‘Trotskyist’ to describe Corbyn’s supporters, and to associate this with violence, “arm twisting” and intimidation. This has actually been going on ever since Jeremy’s campaign inspired half a million people to ‘infiltrate’ the Labour Party, but it has now reached truly hysterical proportions.

This week Tom Watson, Corbyn’s deputy, launched an astonishing and utterly ridiculous attack on his leader’s supporters. In it he claimed that “Trotskyists are twisting the arms of young Labour members” It is a rant of such hysterical proportions, that I genuinely don’t know where to begin. On the one hand, I want to point out that Tom seemed perfectly happy to court the support of these alleged revolutionaries, when he was running for deputy leader; on the other I want to rail against the implicit insult to young members who, he suggests, can’t stand up for themselves or make up their own minds.

It would be easy to portray this as just a last, desperate attempt to cling to power, through smears and innuendo. And to be fair there is some truth in that. The challenge to Jeremy Corbyn’s leadership, is actually an attempt to ‘oust’ a man who was democratically elected only ten months ago. Ironically those involved have used intimidation and bullying in the PLP and on the back-benches, in order to “break  Jeremy as a man” and force him to resign. When that failed, Angela Eagle and Owen Smith emerged as challengers. Since then every attempt has been made to ‘stitch up’ the election, by closing down meetings, and denying members, thought to be pro-Corbyn, their right to vote.

In reality those attempting to cling to power, against the wishes of the membership are failing, and as a result their language and tactics have become increasingly desperate. But let us be clear, their attempts to use the word ‘Trotskyist’ as an insult, are both politically illiterate and designed to place certain ideas beyond the political pale. Many have taken to social media in response, in order to deny that they are ‘Trots’. However, if we are not careful, such fervent denials could end up doing the job for them.

The overwhelming majority of new Labour members would not describe their political ideology in this way. I am sure most have never engaged with Trotsky’s work, let alone joined an organised group. However, does that mean that we have to accept the word as an insult, without really understanding who the man was and what he stood for?

For the record Leon Trotsky was a Bolshevik who fought against the rise of bureaucracy and ‘Stalinism’ in the former Soviet Union, following the death of Lenin in the early 1920’s. The rise of an elite within the Communist Party was suppressing all dissent, and for the crime of fighting this, Trotsky was exiled. He struggled to find refuge in a hostile west. Ultimately he found himself in a state, he eloquently describes in his book, ‘My Life: An attempt at an autobiography’, as being “on the planet without a visa”. He was eventually brutally murdered by Stalin’s agents in Mexico. 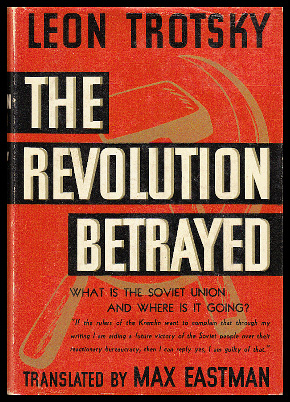 Trotsky was a dissident in Stalin’s Soviet Union

Of course when it comes to revisionism and demonising ideologies, Labour, and in particular the right-wing of the party, has been here before. It is perhaps no surprise that, in trying to rid themselves of troublesome members who don’t want to march to their tune, they fall back on familiar tactics. However, there appears to be dissent, even within their own ranks.

In a surprisingly sober and honest interview in the Guardian this week, Peter Kilfoyle, the man charged with ridding the party of any vestige of “Trotskyism” in the 80’s, stated that Labour’s current mass membership bears no resemblance to those who joined the party decades ago.

He describes Momentum as people disenfranchised and ignored by Labour over many years, and who have found, in Jeremy Corbyn, someone who represents their views. Militant, he states, were a tightly organised group, with a particular ideology and a strategy formulated over many years. Words he could easily have used to describe the ‘Blairite’ takeover of Labour and the ‘Progress’ group, but never mind.

Kilfoyle’s analysis aside, there is a supreme irony in the fact that we now have bureaucrats in the British Labour Party, suppressing dissent and democracy in ways Stalin himself would be proud of, and using the word ‘Trotskyist’ as an insult. You couldn’t write it, except I just did.

I’m not trying to recruit a new army of supporters for the former Soviet revolutionary here. I’m simply asking, once again, that people think critically before accepting the narratives of others. Find out for yourself and don’t allow others to tell you which ideas and thinkers you can listen to. Perhaps we would all do well to respond, as Chaplin did, and refuse to accept the negative connotation.

Am I a Trotskyist? I do not have that good fortune.