Anne Williams A Woman Not for Turning 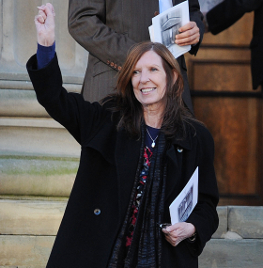 I was deeply saddened to hear the news of Anne Williams’ passing today. My thoughts are with her family, friends and loved ones. I never knew Anne I never met her, but she was someone for whom I had the utmost admiration and respect. For those who don’t know her story, Anne lost her son Kevin aged 15 in 1989 at the Hillsborough Stadium disaster. Although at the time the official record stated that Kevin was dead or beyond saving by 3.15 pm Anne always knew this was not the case. A police woman later gave evidence that he was alive and had actually called out “Mum” long after that cruel and arbitrary cut off point imposed in the original inquest. That officer was told to amend her statement removing the information that jibed with the official line, thereby exonerating the police and emergency services. If he was dead by 3.15 there was nothing anyone could have done to save him. This was just one aspect of the cover up that fuelled Anne’s relentless quest for truth and justice.

Anne, an ordinary mother turned detective and lawyer in the 24 years that followed. She fought a heroic campaign along with the Hillsborough Justice Campaign (which she chaired initially) and later Hope for Hillsborough. Time and time again she had the judicial doors slammed in her face. Time and time again she went home to gather more evidence, before returning to bang at those doors again. She took it as far as the European Court of Human Rights, only to be told her case was out of time. She would have been forgiven for throwing in the towel there and then. She could have proudly claimed to have done all she could in her sons name. Not Anne.

“I knew what they were doing.” she said recently “They were trying to wear me down. But I just thought I’ll wear you down before you get to me. I was never going to give in”

Nelson Mandela once said “Judge me not by the amount of times I am knocked down. Judge me by how many times I pick myself up and carry on.” Anne Williams can be compared favourably to any of histories great fighters for justice. Her life’s achievements will reverberate through time. She is a model for any parent fighting for a child who has been wronged.

Inevitably her death, coming just a day after the funeral of Margaret Thatcher has drawn comparisons on Merseyside of the legacies of both women. Ironically speaking on the steps of St Georges Hall after the release of the Hillsborough Independent Panel Report, Anne talked about the online campaign for a state funeral for the former Prime Minister. This online petition was actually the inspiration behind Anne’s own petition for the Attorney General to reopen Kevin’s case. Anne’s petition later attracted more than 100,000 signatures. Many have today referred to Anne Williams as the real “Iron Lady”. I believe she is truly deserving of such an honorific.

You see it is easy to be an iron lady when you have the full weight of the state, the police and the media on your side. Try doing it when your a mum fighting a lone battle against that state aided and abetted by a police force and media whose sole purpose it was to make your life impossible. So impossible that you would turn away quietly and “get over it”. Anne was not for turning. She fought on, aided and abetted by a city and a justice campaign that spanned the globe, but always as its leader. Make no mistake she was made of iron. Anne lived long enough to see her sons verdict of accidental death overturned, she saw the original inquest and arbitrary 3.15 cut off point quashed. She fought for 24 years to exonerate her son, a fan base and an entire city. That she never lived long enough to see full justice is the cruellest of blows, but she could have done no more in her sons name.

Yesterday Liverpool City Council declined to fly its flag at half mast in honour of Margaret Thatcher. Their reason? “This is an honour reserved only for the death of Royalty.” Today they lowered it in honour of Anne Williams…..enough said.