I sat on the cold damp steps of St Luke’s, my eyes fixated on my phone as I nervously awaited the result of Labour’s leadership vote. Around me people were beginning to arrive for the ‘Protest Liverpool’ rally in support of refugees. A myriad colours passed by. Flamboyant clothing and students sporting even more vibrant hairstyles drifted past. The pinks and greens were a refreshing antidote to the grey sky that was threatening a downpour. Not that it would have mattered. In truth not even a storm of biblical proportions could have extinguished the burning sense of hope in my heart.

I had been glued to my handset on the train ride into the city centre and even as I walked up Bold Street to a building, affectionately known locally as the ‘bombed out church’, I could barely look up. Sky, the BBC and most commentators were calling it already. Corbyn had won on the first round. Nervous excitement flickered briefly, but I’ve been here before. The thing about hope is that it’s a double edged sword. It can lift you in times of despair, but when it’s snatched away the pain doubles and crushes you.

St Luke’s has a special place in the hearts of Liverpudlians. The merest suggestion by the council that it could be sold off to create a wedding venue and hotel, was recently met with rage. It survives now as an arts venue, kept alive by the hard work and dedication of volunteers and donations. It is one of many symbols of the city’s defiance. During World War 2 it survived the full force of Hitler’s ‘blitzkrieg’. While the heart of the building was destroyed, it’s outer walls have been flipping the Nazi leader the bird ever since – as if saying “Is that all you’ve got.”

As metaphors go, you couldn’t find a more appropriate one for Jeremy Corbyn. He has endured an all out assault from both within and outside of the Labour Party. An unholy alliance of the Party’s right-wing , the media and the Tories has combined to unleash some of the most absurd and at times deeply insulting attacks on the veteran Socialist. They are sure to step up the onslaught, but so far he has proved as resilient as the walls of St Luke’s.

Back to my phone and the moment had finally arrived. Tom Watson was delivering his victory speech. His victory was a positive sign. He had openly committed himself to working with Corbyn should he win. He spoke of building the party into a mass movement, echoing the views of the MP from Islington. Labour was the last line of defence between the poor and government he had said, before leaving the platform to make way for the new commander in chief.

In the end victory was resounding. In just three months the Labour Party has trebled in size, exploding the myth that the people won’t rally to a powerful left-wing message. This was the biggest franchise of any political party in recent history. Not since the end of the war has the Party’s membership reached anywhere near these levels. More people voted for Jeremy Corbyn than there are members of the Conservative Party. 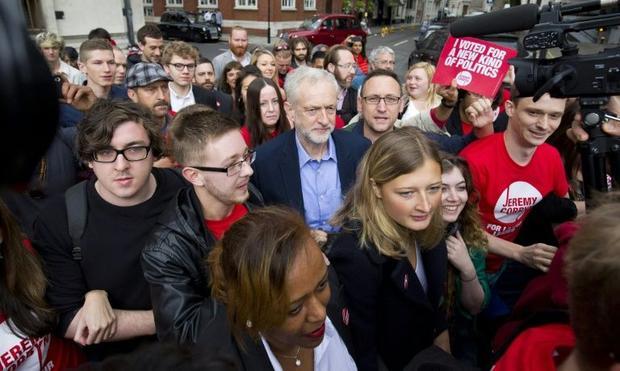 Despite the best efforts of a Blairite rump to nobble the election, by excluding anyone deemed likely to support Corbyn, more than a quarter of a million people stood firm and delivered a resounding verdict. His victory was so comprehensive that, even had the Party apparatus managed to exclude every one of those who had paid £3 to vote, they could not have prevented him from winning. He won in every category and has a greater mandate than Tony Blair had to change the Party.

Corbyn’s speech was full of hope and spirit. I had to press my phone to my ear to hear him as the volume of people around me grew. He spoke of resistance and of humanity. He correctly turned his fire on the media and promised the Tories they could no longer expect an easy ride inside or outside parliament. His first act as leader would be to address a demonstration calling for more support for refugees. It was the kind of speech I thought I would never see again.

This is a historic moment in the history of the British Labour movement. Many of us on the left have at times felt like giving up, so tight was the grip of the right-wing. Even committed Socialists within the movement had become convinced that this was the only way. In order to win power we had to be like the Tories. Then along came a candidate who marched to different tune and hundreds of thousands of people were following him. What’s more he was saying things that deep down they really believed, but had been persuaded could not be repeated in public. 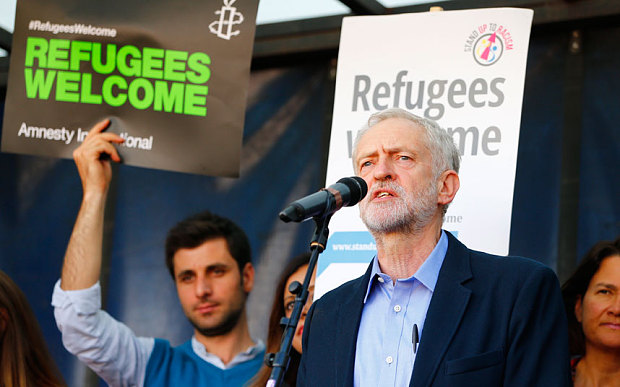 For too long real debate and discussion has been stifled. Ideas have been off the table and focus groups and polling experts have held sway. Public opinion has been conflated with media and pundit opinion. Now all of that has been exposed as the lie that it is.

It will no longer be acceptable to meekly go along with a Tory assault on the poor and vulnerable. Creeping privatisation of the NHS will be fought and the democratic rights of workers to organise and campaign for justice will be protected. Most of all it will now be possible to challenge the lie that poverty is necessary and that the poor and working class must pay for the excesses of unregulated capital. The doctrine of austerity is a lie and it doesn’t have to be like this.

Jeremy Corbyn has pulled off an incredible feat. When the campaign started you could have got 250/1 on him winning the election. He deserves great respect for the battle he has fought and for the way he has conducted himself with dignity. It has been a truly remarkable journey, but this is just the beginning.

If Labour is to win in 2020 it will have to endure and survive the most appalling attacks from a hostile press and media. We were offered a taster with the Panorama character assassination. But even that will pale in comparison to what will come in the months and years ahead. However, Labour cannot flinch from the task.

The only way to counter these attacks will be to build a genuine mass movement. The Party must grow still further. The target should be a million members, even two million. It’s far from impossible, but it has to start now. Imagine the impact of a movement of that scale. What if in every factory, workplace, college and university there were people ready and able to challenge the lies and vitriol spewed by the Murdoch machine.

The rules of conventional wisdom and political spin said that Jeremy Corbyn wouldn’t get this far. He has torn up that rule book. The Labour Party will never be the same again. Beyond it there will be millions of people whose prosperity, health and well-being depend upon the success of this fledgling movement. As I rode the train homeward I realised that ‘New Labour’ is now dead. Long live ‘True Labour’ and a new hope for a better future.