Remember the run up to last General Election? What a time that was. If you recall Britain was in a revolutionary state. Demonstrations, riots and people out on the streets in their droves, burning the flag of the European Union and demanding an immediate withdrawal from the single market. It was a heady time, remember? No? Well actually neither do I, because of course none of that happened.

In reality, unless you are Nigel Farage, you’d probably struggle to trace your anger against Europe beyond the Spring of this year. For all those outside of David Cameron’s troublesome right-wing and UKIP, the questions of Britain’s membership of the EU hardly registered in terms of priorities. Not even Boris Johnson could find it in his heart to advocate ‘Brexit’, until the opportunity to undermine his leader presented its self that is.

It’s worth pausing here and reflecting on what an absolutely disastrous strategic move it was, for Cameron to offer the right-wing of his party a referendum. Prime Ministers rarely survive such incompetence and whatever the result on Thursday, it’s hard to see him staying in office. The campaign has been at best a distraction from the real issues we face, and at worse a lurch into a murky world of nationalism that cheapens us all.

Anyway back to my main point.

I’m not suggesting you’ve all been in love with the Council of Ministers. Many of you probably harboured concerns about bureaucrats in Brussels dictating how bendy a banana can be. Although, when you really thought about it, you probably realised that was just nonsense dreamt up by the Daily Mail and their ilk.

What really bothered you, I would suggest, was the funding crisis in the NHS, problems in our schools, bedroom tax, the housing crisis, homelessness and austerity in general. The cupboard was bare, you were being told and it was time for you to tighten your belts. Given the crisis in our pubic finances there really isn’t enough money, they said, to pay for our generous benefits system and pay rises for public sector workers.

Broadcasters, presumably to the delight of Iain Duncan-Smith and George Osborne, filled our living rooms with stories of the feckless unemployed living ‘high on the hog’ in council houses funded by hardworking  tax-payers. All the time they ignored the colossal sums of money being funnelled off-shore by the super rich; money that could and should have have been funding the NHS, education and preventing the damaging cuts to disabled benefits.

It would have worked to if it hadn’t been for those meddling hackers who leaked the ‘Panama papers’ and exposed their sordid hypocrisy. Not even the Prime Minister himself could avoid the scandal. The government embattled on all sides, under siege from within and without, was reeling and their economic policy was rapidly being exposed as the outright lie it was.

This made you furious and rightly so. You had finally seen right through so called ‘big society’. The game was up it seemed and the Tories were exposed.

Except it seems that the proponents of austerity have found yet another ‘get out of jail free card’. They appear to have a never-ending supply of bogeymen lurking up their sleeves, ready to scare a terrified public back into the cold embrace of austerity. The first of these is the refugee, or as David Cameron refers to them, “a bunch of migrants” or a “swarm”. Are we really going to fall for this? The other is of course the European Union.

No longer able to blame the British poor and unemployed for our woes, attention soon shifted instead to the tide of humanity fleeing destruction and all manner of privations. They have been described as ‘economic migrants’ marching across Europe, eager to destroy our way of life and collapse our public services. To be fair, if that’s true, they’d better get a move on, because if they don’t get here soon the Tories will have done the job for them. 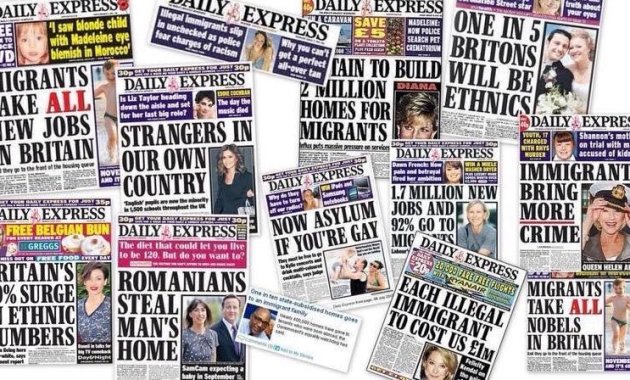 Meanwhile a dutiful press drip-fed voters a daily diet of ‘evil foreigner’ stories. It seemed immigrants were guilty of everything from stealing our jobs, while at the same time claiming unemployment benefits, to rape and murder. So it is against this backdrop of anti-immigrant propaganda, that many have asked themselves how we can afford to help others when, according to the government, we are struggling to help ourselves.

When you think about it, this is a spectacularly successful con-trick. Somehow they have managed to run down our public services, slash welfare provision for the most needy in society and, after failing to blame the British public for the mess, have somehow found someone else to ‘carry the can’ for their disastrous policies; ‘foreigners.’

This campaign reached an inevitably vile conclusion this week, as Nigel Farage stood, grinning, in front a poster Goebbels would have  been proud of. We are surely better, fairer and more rational than this. Aren’t we?

Can we not see past these manipulations? It seems there are no depths these sharp suited demagogues won’t plough. Even when their machinations are glaringly transparent, they are seemingly undeterred.

Consider Iain Duncan-Smith. After years of wielding the axe against the most vulnerable in society, he suddenly and miraculously transformed himself into a ‘compassionate man of principle’. Apparently he had been forced into austerity against his will. The main stream media couldn’t, or more likely wouldn’t portray this as it truly was; a shameless self-motivated attempt to undermine his cabinet colleagues and align himself with a post Brexit Tory government. Thankfully most of the rest of us could.

And what would such a regime look like? Look no further than the comments of Gove, Johnson, Patel and IDS. The ‘Leave Campaign,’ of which they are the leading lights, have spoken of the need to remove the burden of regulation from business. It’s worth noting that what they call a “burden on business,” the rest of us call workers rights and employment protections. We need to leave and take back control, they say, but control from who and in whose interest?

Surely such a position is so unpalatable to British workers, they could never get away with it. It seems they know this themselves, so they have concocted a potent mix of xenophobia and appeals to patriotism to distract us from their real mission; which is of course the bonfire of workers rights they have so far failed to implement fully.

So, robbed of their ability to blame Labour, the poor, the unemployed or so called ‘greedy’ public sector workers for societies ills. They have instead turned their attention to Europe and that oldest of stand byes, immigration, to convince us all of the need to march to their tune.

If we were to blindly follow them out of the EU, we would in my view be falling for one of the greatest confidence tricks of all time; the equivalent of a Star Wars style Jedi mind-trick. “It’s not us destroying your way of life” they say almost hypnotically “It’s them over there. Hate them. Let us protect you from them.”

Or, are you actually furious at the dismantling of the NHS, the lack of affordable housing, or the rise in homelessness and dependence on food banks? If you are I respectfully suggest that you direct your ire where it belongs. Blaming Europe for these ills, no matter how imperfect that institution is, only lets the real culprits off the hook.

It was unregulated bankers, not European regulation that caused the economic crash; and ministers at home and abroad, not migrants, who dreamt up austerity. Syrian refugees didn’t bomb themselves. Our governments did that. So let’s stop the cycle of victim blaming and misplaced anger.

We can only solve our problems by working together with people across geographical, ethnic and national boundaries. Isolationism, intolerance and fear are the enemies of progress. Unity is strength and cooperation with like-minded workers across the continent can help create a better Europe. Vote ‘Remain’ on Thursday and help create it together.