The self-styled ‘moderate’ wing of the Labour Party is mounting a desperate rearguard action against the newly resurgent left. They have unleashed an unprecedented and vitriolic campaign against Jeremy Corbyn and his supporters. This is familiar territory for Labour’s right-wing. Those of us who were part of the movement thirty years ago will recognise some of the tactics, and even the language being used.

In the 80’s, Labour’s leadership were on the warpath against Militant, a socialist organisation that argued for the party to adopt a left-wing platform and resist the Tories inside and outside of parliament. Rather than ‘stand outside the tent pissing in,’ Militant argued their case from inside the Labour Party its self; in much the same way Progress, their right-wing antithesis, argues for pro-capitalist policies inside Labour today. When the left do it, it’s called ‘entryism’ and they are expelled from the party. When the right do it, they are called a ‘think-tank’ and lauded.

In the old days Militant were accused, by the right, of bullying, harassment and seeking to impose their rigid ideological outlook on poor unsuspecting Labour members; presumably through political re-education camps, brainwashing techniques and, when all that failed, violence. These were of course baseless accusations, but why let the truth get in the way of a good smear? Sound familiar?

By the 80’s the political establishment had long been perfecting the tactics they used against those who opposed their policies. We now know that Irish civil rights campaigners, brutally and illegally mowed down on ‘Bloody Sunday’, striking miners at Orgreave, football supporters caught up in a stadium disaster at Hillsborough, and countless others were wrongfully accused of crimes in order to suit the needs of the establishment. They were all victims of an old, but newly honed weapon of the political class; the use of false narrative.

This cynical strategy involves a conspiracy between the organs of state, the police, politicians and the media to alter the way events are perceived by the public in order to shift blame away from the guilty and onto the shoulders of victims. It’s aim is to preserve the system as it is, and prevent any meaningful opposition or resistance from gaining traction.

This practice has been exposed on many occasions. Not, as we might hope, by a repentant mass media, or a benevolent government; but through relentless campaigning of ordinary people, often at great personal sacrifice. While some individual journalists can hold their heads high, in the main the role of the ‘fourth estate’ in these matters has been an affront to the very idea of democracy.

Sadly though, it seems that old habits die hard. The ink isn’t even dry on the Coroner’s inquest into the deaths of the 96 in Sheffield, which laid bare the extent to which the state and the press conspired to create a false narrative that persisted for a quarter of a century, denying countless people the justice they deserved, and they are at it again.

Today the new ‘enemy within’ is not football supporters, or civil rights campaigners. It’s not striking miners or left-wing city councils. It is the Leader of the Labour Party and a grass roots movement called Momentum. What could possibly explain the extraordinary level of animosity towards him and his followers? Could it be the fact that Corbyn’s rise to prominence threatens their power control and influence?

Surely if his ideas were so unpopular, he could be defeated simply by leaving him to be damned at the ballot box. Of course the inconvenient truth for his detractors is that each time the public have been given this opportunity, the results have been far from damning. Herein lies the truth behind what a London School of Economics study described as a sustained and systematic campaign to ‘delegitimise’ the Labour leader.

Despite their best efforts, Corbyn’s legitimacy as a candidate is beyond reproach. Party membership is hovering around 600,000. Labour is the largest Socialist Party in Europe. In the space of one week, during the height of the Parliamentary Labour Party’s bullying, 100,000 people joined the party. The vast majority did so in order to defend him in the inevitable leadership contest that would follow.

This surely confounds the right’s claims that Corbyn is unable to reach out to voters, or appeal to the membership. What they actually mean is that he can’t reach out to them. In truth, he never could and they have been planning their coup from the moment he was elected. In their minds the attitudes and beliefs of 172 people carry more weight than those of more than half a million.

Attempts to dismiss the membership as nothing more that “Trots”, “dogs” and “rabble” are scurrilous. Angela Eagle’s suggestion that those joining, in their hundreds of thousands, are the same people expelled in the ’80’s, a claim brilliantly mocked by the comedian Mark Steel recently, is an excellent case in point.

Does she really believe that the ‘revolutionary left’ have been hiding half-a-million members for over thirty years? Actually I wish this was true, because if their numbers really were that strong, we’d have achieved socialism years ago.

The reality of course is that the ideas espoused by Corbyn are actually popular with young people, workers and the poor. They offer hope of a different type of society and an alternative to a government of the power hungry elite who seek to make the majority pay for the crises cooked up by the 1%. Claims that people signing up to support Jeremy are all fervent ‘Trotskyists’ are merely part of the same campaign of false narrative wheeled out so many times in the past.

Everything, including the kitchen sink, has been thrown at Corbyn and Momentum in an attempt to derail him. There isn’t space in this piece to explore the use of the party’s machinery to stifle debate and limit the right of members to vote for him. But the campaign of myth, distortion and manipulation has to be explored.

In the last week alone, without a shred of evidence to back up their claims, Jeremy’s opponents have accused him of inciting members to abuse his opponents. Despite recent calls by Jeremy for calm rational debate and the need for comrades to respect each other, he has been met with demands to “call off his Momentum thugs”. There have been accusations of homophobic bullying of Angela Eagle at a meeting in her Wallasey constituency. These claims are refuted by members, who point to the fact that she wasn’t even at the meeting in question.

All of this froth evaporates under even light scrutiny. Yet the media, in particular the BBC, report them as fact. Recently I even heard one ‘anchor’ ask “how can there even be a leadership election with all this intimidation going on?” Just like the furore over antisemitism, later demonstrated to be exaggerated and unfounded, these lies have passed into the public consciousness and are being used as justification for suppressing meetings and denying members their right to vote. 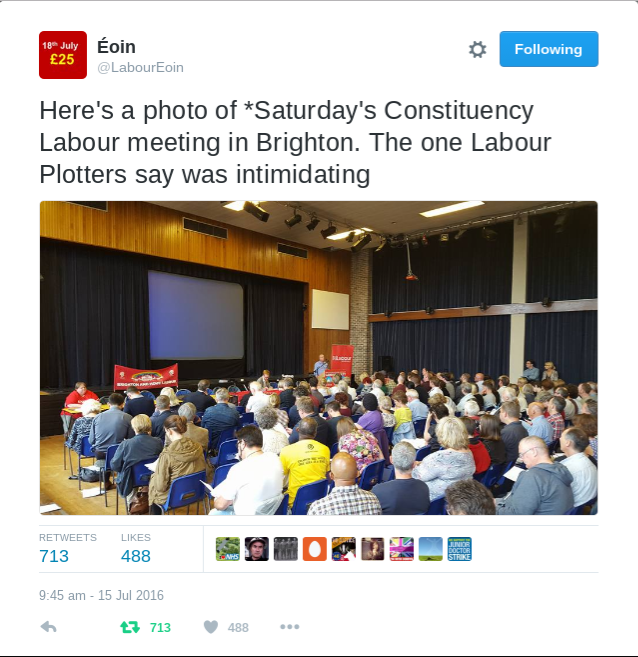 Momentum are routinely abused. They are often referred to as rabble or even a cult. As a member myself I find this to be utterly ridiculous. I, just like every fair minded citizen, firmly believe that the use of violence, intimidation or religious, homophobic or racially motivated language to undermine opponents is abhorrent.

Let me be clear. I have no doubt that amongst the ranks of any mass movement, including our own, there will be those who behave inappropriately, but to suggest that they represent the whole in order to advance your attempts to subvert democracy is shameful and divisive.

Equally the suggestion that I and countless others are engaged in a cult of personality would be laughable, if it wasn’t gaining traction in the media. I don’t seek to sanctify Corbyn as an individual. Rather it is his ideas that I, and many others, are attracted to. I do believe he is a decent and honest man, but I am also willing to concede he must have flaws, just like the rest of us.

What others call blinkered support, is simply my belief that you don’t stand by and watch someone receive an unprecedented political kicking, while championing the causes you believe in. The right thing to do in such circumstances is always to stand in solidarity and defend that person. That’s just how I see life.

The narrative around Corbyn and Momentum is one of an unelectable dreamer, incapable of leadership, while at the same time commanding an army of over half-a-million sycophantic followers, willing to subvert their own moral code and engage in ritual abuse of his opponents. It is a profoundly false and absurd one. It’s only purpose is to restore a bankrupt parliamentary consensus and a centre-right leadership to the party.

In the same way we now know that claims that Liverpool supporters “robbed from the dead and urinated on the emergency services” are hideous lies intended to marginalise and undermine their pleas for justice, we must also recognise that the campaign against Corbyn and Momentum flows from the same motives and uses the same tactics.

Preventing this cycle of abuse of power and influence must become a central plank of the left’s future programme. But for today, one thing is certain, should the right-wing succeed in denying the membership their democratic choice, we will not be able to entrust the resultant leadership with that task. After all, the false narrative is a tactic they have used with aplomb in recent months.